Why it’s not really bluegrass (or any other “style” btw) – but hey, What’s in a Name?

Anyone who finds themselves in the Old-Time music scene is sure to have been told (or told others), “No, it’s old-time music”. Huh? Did I miss the question? Nope, you heard it even without hearing it. And it wasn’t a question. That is the response when you or some other of the Old-Time uninitiated says, “Say, that’s some good bluegrass music!”

I think it is good to know a little bit about the folks who write the articles you read so I am beginning this one with a little bio-introduction. I have been performing for most of my life so far. My current “profession” is as a musician – performer, teacher and writer and have been playing music actively since the age of 3. My mom played guitar and piano, sang in her choir and met my dad at a community square dance. My dad called dances and listened to many types of music including bluegrass, bagpipes, fife and drum, classical music and jazz. They lived and participated during what has been called the great folk scare of the mid 20th century, hosted music gatherings at their home and participated in the folk events of their day, often taking me and my sister along with them. I remember helping dad with his sound system when I was about 6 and reaching up to “play” piano before that. In addition to all of this, my next-door neighbor was Karl Kritz – the then director of the Pittsburgh, PA symphony orchestra. He taught me to conduct his stereo at the tender age of 7. I started violin by age 9 and by 11 was playing guitar.

It wasn’t until years later that I would rediscover my roots and start playing what we now call “Old-Time Music”. I had several banjos in my high school and later years, but it was not until I was almost 30 that it happened. I discovered “Old-Time” – again! I started going to the local square dances, taking my kids (the youngest not yet two) when it took over. The world would never be the same, and neither would I.

Now, back to the subject at hand. It has been some years since that day that I was told, “It’s not bluegrass, its Old-Time,” by The Rustical Quality String Band. They were playing for The Coal Country Cloggers – the group I was dancing in at the time. And since then it is I who has heard the same comment and answered the now predictable string of questions that follow.

And that’s the short version. Here’s the “poop”, (as the old timers used to say). Once upon a time, it was all old time music. That was until a fellow named Bill Monroe came along and formed his “Bluegrass Boys” band and another fellow, Earl Scruggs, decided he was going to take the banjo back to the people and codified several now famous 3 finger banjo “rolls”. Their primary goal was to commercialize and socialize old time music in a performance setting and to this day, you see more bluegrass on stage and more old time at home, the dances and in “the parlor.”

So, how’s a puppy to know. Well, here is a basic old time primer based on today’s biases and the myths that have become so ingrained that never the twain shall meet – or at least not for my generation.

There are two basic differences between the music’s instrumentation that can give you a key. The most common or cliché’ configuration of the modern string band has been fiddle, banjo, guitar, bass and OCCASIONALLY a mandolin, sometimes a harmonica. First, the banjo and banjo style. Today’s old time band virtually insists on open back (no resonator) banjos played in the clawhammer (stroke) style. No finger picks, skin (or fake skin) head, deeper plunkier tone. Then the fiddle is usually also looking for a more mellow tone but played in a strong rhythmic style, not too notey and very few double stop chords but lots of drones and cross tuning.

One problem that I see is that my generation has limited what the generation before us presented. We have restricted an almost anything goes mentality (you play what you got however you can play it) into an “I’ll tell you what is and isn’t old time” right way/wrong way one. What we refer to today as Old Time is mostly what I would describe as Southern Appalachian String band dance music primarily of the early 20th century and features clawhammer style open back banjo in a band primarily containing banjo (open back, played clawhammer style) fiddle, guitar and bass and OCCASIONALly mandolin, or harmonica, when in fact, this is only one of many configurations folks truly used for old time music.

We have taken the music of innovators and made it so rigid, there is no longer room to express yourself and change it to play it as you see fit. Recordings are somewhat to blame but the primary reason is that travel has become easier and references are more available which give us reason to say, “Hey, that’s not how she did it, you gotta sound like…(or I want to sound like…)” instead of, “Hey, heard this great tune from so and so who was traveling through, and I think it goes something like this.” Nope, too many ipods and slowdowners for that. Didn’t read music? We do. Even if it is “by ear” today, that means slowing down a piece until we play it exactly note for note as “so and so” did and if that ain’t readin’ nothing is. Might as WELL have written music.

SO, here are a few what I will call “Myths” that folks usually ascribe to old time music today and my thoughts as to the truth of the matter.

Myth 1: There were no professional musicians and it all was regional and family based.

Truth: Many, if not most of the commercial recordings we refer to were made by folks with a career in music. Perhaps (like today) not their only career, but they were often paid to record and some bands such as the Skillet Lickers had pretty big careers.

Myth 2: There was no 3 finger banjo before bluegrass.

Truth: The “old guys” (and gals) played whatever they could get and some folks wanted a cool ol’ Mastertone then just as they do today. Charlie Poole and Wade Ward are two famous Old-Time banjo player who played resonator style banjos. (Oh, and Charlie played fingerstyle!)

Truth: I have met many and most all of them while they do not “play from” and/or may not be proficient, they DID read music. Yes, some didn’t, but like in all things, it just ain’t black (dots) and white (spaces).

Truth: well, we covered this didn’t we.

Myth 6: It ain’t bluegrass if there is no mandolin or ain’t no banjo.

Truth: Hmm, tell Nickel Creek that one. Instrumentation alone doth not a style of music make.

Myth 7: It ain’t old time if there is a mandolin.

Truth: Don’t say that to the Mando Mafia, or for that matter, Norman Blake. Folks played what they had. I remember Les Raber (89 when he passed some years ago) telling me about playing french horn in a band up his way.

Myth 8: Old time (and to some bluegrass) is rural music and if you didn’t grow up in the country, you are not “real” old time.

Truth: We moved “off the farm” back in the industrial revolution in the 1800’s and the process has been urban ever since. They came to town for work or glory and took their music with them. It is only natural it took on its surroundings and melded with the music it found there. Charlie Acuff and his brother once roared with laughter when they heard Miss Jennifer’s story of growing up on an old dairy farm in western Washington State. “Why, girl, you’re more old timey than us! We were raised in town!”

Myth 9: There are traditionalists and revivalists.

Truth: It never died even if it did fall out of commercial favor (Hillbilly and string band music were THE modern popular music of the 1920’s – don’t let ‘em kid ya). Can’t have a revival if it never died so as to need revivin’!

Myth 10: If you didn’t learn it by ear from a “real” old timer or (variation on this) you don’t play it like “so and so” played it it’s not real old time.

Truth: The older folks we now consider our sources changed a lot and definitely personified their playing while maintaining their musical thread to the past. Charley Acuff loved showing me all the records he learned from. Ol’ Joe Thompson was said to be asking everyone at a banjo camp one year if they knew and could teach him to play “Truck Driving Man”.

Slowing a recording down so you copy someone else’s playing note for note is just reading music with your ear. Learn the flavor and interpret the tunes you hear, don’t copy them slavishly by written OR recorded resources. Those sources are inspiration, not dictation.

Truth: Round peak is an area of the country where there is great history and presence of both bluegrass and old time music. Likely many other styles as well. The style that is spoken of is that of a small number of innovators such as Tommy Jarrell, Fred Cockerham, Wade Ward and Kyle Creed who happened to live in that area. When asked in an interview if everyone around “here” played like Tommy Jarrell, his response was, “Nope, I’m the only one.”

Truth: Yes, I may never consider the Duhks or Foghorn really old time bands, but that is MY bias and need not be yours. Old time music is what you make of what you have heard. You have more resources, influences and outlets than my generation or any one before it has had. Use ‘em all and make it Old-Time Your Way. Just know that your style may not appeal to those who prefer a more traditional sound to their old time.

Okay, so now I’m the curmudgeon, I guess it’s time for that for me, but Straypickers, do it your way. Don’t let others dictate what is and isn’t old time or any other type of music. Know the rules we have had so far, but feel free to break the rules. “Right or wrong” ways of playing only matter to the group you want to play with. Mix the styles, instruments and rhythms. Different mixes will not fit our predetermined groups of yesterday, but should be exciting and musical in their own right for generations to come. Someday, your grandkids may be saying, “This is an old time tune from my grandma’s band” and what was innovation to them will be tradition to you.

The only thing I ask these days is that we celebrate the acoustic music and show em it can be done without pluggin it in. Please honor the thread that takes it into history and the communities that it has come from. It may not be old time to me, but it’s your turn now.

Oh, and one more thing. Whatever you do… 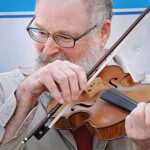